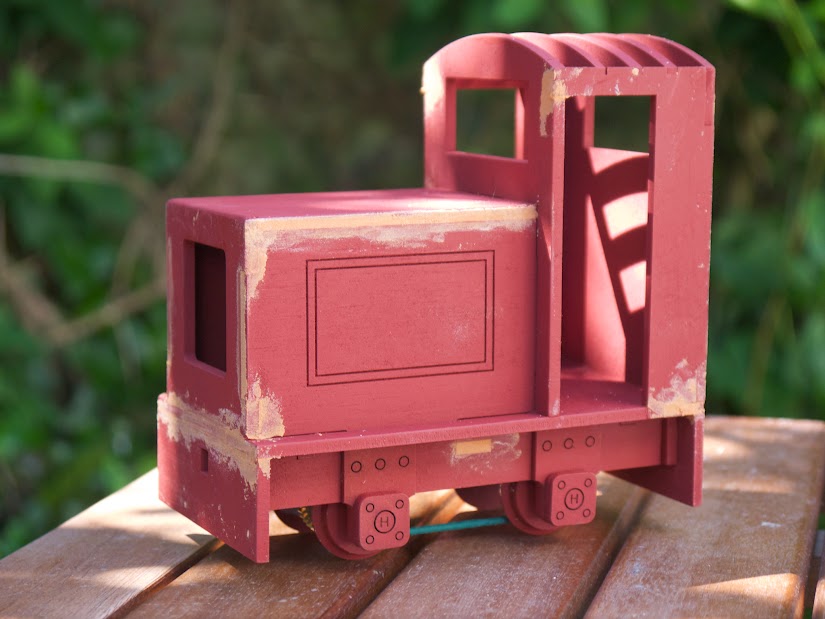 With a wagon already, and even some track to run it on, I now needed some motive power.

I’ve already revealed my aspiration to run live steam… So I didn’t want any steam ‘outline’ locos that weren’t actually steam powered (I feel weirdly fundamentalist about this, not sure why). But I’d like to run a diesel too – and I was happy for that to be electrically powered. (Since there’s live steam – why there live diesel? Miniaturised internal combustion?)

My indoor modeller instinct was to run current through the track for the loco to pick up via its wheels and feed to its motor (indoors this has become very sophisticated, with the advent of digital). But outdoors the problem of dirty track is on a different scale! That’s not to say there aren’t track-powered garden railways – there are loads (most, from my observation, seem to be 45mm gauge, I don’t know why). But spending loads of time cleaning the track doesn’t appeal to this lazy modeller… So I started looking at battery power, with radio control… and discovered (via this excellent post at the Peckforton Light Railway blog) there are RC systems so sophisticated that on RMWeb folk are advocating its superiority to DCC for use on 009 (proposing equipping each loco with a li-po battery and only having track power in the fiddle yard, for the purpose of recharging).

As I read more (and as the reality of the complexity manifested) I began to appreciate how some people enjoy just setting a train moving in the garden and watching it go round without having to control it at all. No radio control, just an on/off switch on the loco. Whilst, in terms of sophistication, this is on a parr with the battery locos on my nephew’s Brio, I can relate to the appeal of simplicity. Also, I’m not going to do any shunting while the railway is nothing more than a loop of track. I can add radio control to the loco later, if needed.

So, a simple, basic battery loco. On a very tight budget.

I was sorely tempted by ubiquitous IP Engineering Rapier, which is just £40 and seems to be everyone’s first loco… but I went for the (astonishingly) even cheaper Houstoun Gate Locomotive Works ‘Everyman’ loco. It has plenty of scope for detail (as estate agents would no doubt say, if they were also agents for locomotive vendors) but it has a certain charm, which is the primary consideration. And it’s designed to be easy for an idiot to put together which, as ever, is a major factor.

The IP Ezee wagon kit was made of ply. This one is made of MDF. It’s tabbed – which means it’s a bit like putting together a 3D jigsaw.

This made it very easy to construct (it’s a really well designed kit) but once the first coat of primer was on, it quickly became obvious the tabs were still clearly visible.

Out came the wood filler… And that brings us right up to date, because I’ve yet to finish it!