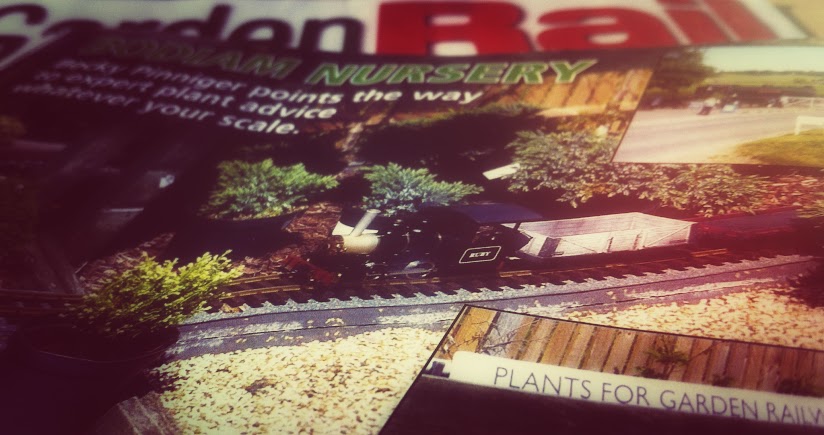 Welcome to my Garden Railway blog.

I’m going to start with a few posts going back to the beginning, before bringing things up to date with the first tentative earthworks now underway.

I’m going to say it started in a garden centre at Bodiam 2 years ago. The truth is, I’ve been planning to build a garden railway since I can remember. In my youth I pored over layouts in Railway Modeller that had overspilled their sheds and overflowed into the garden. In my teens I even started an OO line in the garden around a pond I’d built, although it never even reached the water’s edge.

But, visiting the Bodiam during the steam gala, we popped in to this nursery between trains. To my delight it had a tightly curved loop of G scale track running around one of the wooden stands on which the plants are displayed. It was a month after I’d bought a house with a decent sized garden, and with this vision of charm and simplicity, the garden railway dream was rekindled…

A whole new world was opened by the rails running between those plant pots: in my (indoor) world of railway modelling I had little conception of scales larger that 7mm (having mostly modelled 4mm scale, I’d dabbled in 0-16.5, and vaguely thought about it for the garden). I knew almost nothing about larger scales, nor the possibilities they offered or the civil engineering challenges they might present. New modelling materials and techniques beckoned… and, when I discovered Mamod made locos that cost hundreds (rather than thousands) of pounds, even the (still distant) prospect of live steam.

I rediscovered a comment @AdeRixon had made on Flickr a couple of years earlier, advising me ‘not’ to buy Garden Rail magazine when I’d admired his garden railway pics. I headed for Ian Allen Books in Royal Arcade and bought the June 2013 edition. This poured petrol on the fire. I careful read every article, realising just how diverse and multi-faceted the hobby could be. And yet, it seemed to be a small world; one article featured… a certain nursery in Bodiam.

5 thoughts on “The Beginning”