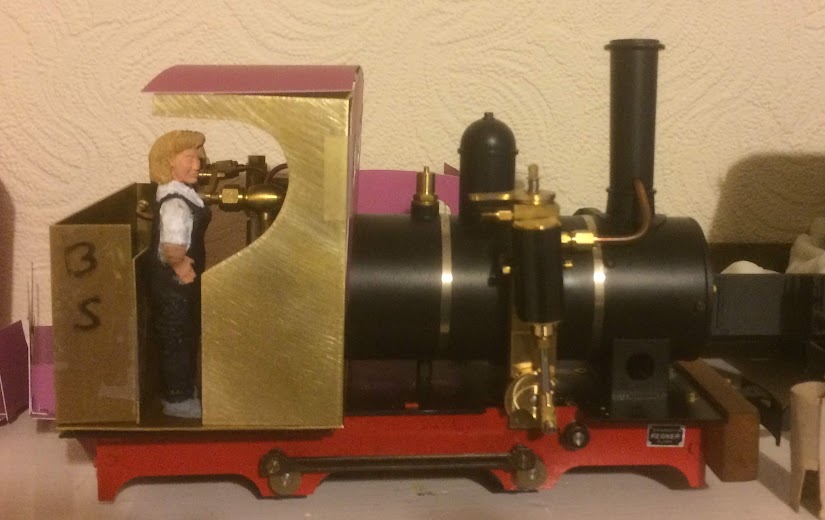 With a clearer idea of the cab I wanted to build, I started out (under the expert supervision of Mr Tony Bird) cutting pieces from 1mm brass sheet.

I scored and snapped rectangular pieces and filed as necessary (scoring with a tool crafted by Tony from a hacksaw blade). Then I cut the curves using a coping saw, in the course of which, being unaccustomed to the tool, I snapped many blades…

The first step was a new footplate, very slightly larger than the existing footplate to allow front of the cab to be brought very slightly forwards. Since access to my cab will be at the sides rather than from the rear, I had to move the gas tank, so we drilled holes through both the new and old footplates – the screws into the tank now holding the new footplate in place too.

I intend the cab be removable leaving the footplate and the lower half of the cab front in place, so these were fixed together using a piece of angle formed from the same brass. We soldered this on, but drilled and riveted it onto the cab front as well, to hold it in place while heating it up to solder on to the floor.

Then we drilled holes for the spectacles using a gargantuan bit, sized to fit the Swift Sixteen revolving spectacles.

These I planned to either solder or glue in place, depending on whether I fit them before or after painting. Daunted by the prospect of cutting the perspex supplied with the spectacles into circles, I asked Tony’s advice on how to do it. He recommended I abandon the perspex and buy mineral glass watch faces instead (available for pennies from Cousins) so I did.

These photos were taken Jan-Mar 2017. Shortly thereafter the evenings grew light and so my work on the Konrad ceased until the following autumn…