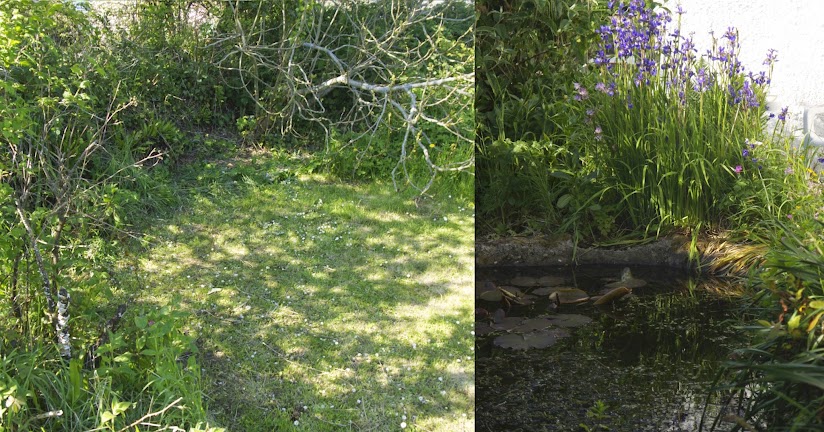 Having decided to build a garden railway, I just needed to make the simple decision: where to put it.  (Apologies in advance for the cliffhanger ending tot his post…But it was almost 2 years before I cut the first sod.)

My garden is long and thin; excellent for a railway if it weren’t for the slope. In theory a slope is quite useful because it allows a compromise between two alternative ways of building the thing…

You can either run your railways round at ground level. Your railway integrates with the garden and looks like it ‘belongs’ in the landscape. This appeals to me strongly; both for the garden (I don’t want the railway to dominate it) and the railway (the romance of “leaving us uncertain of its path” –  this poetic post at Wrack and Ruin strikes a chord “I like railway lines, not locomotives”).

If you raise your trackbed – either on wooden stilts, or, if you like back-breaking labour and have the budget, on raised flower beds – you do have the advantage of both being able to reach your locos and stock without stooping, and being able to watch your trains roll by at eye level.

So if you have a slope, you can have some of your line at ground level and some at eye level – best of both worlds. Except… In my garden it is some 3m or so higher at the top of the garden, and while some challenging civil engineering adds interest, deep cuttings or viaducts at the height of upstairs windows aren’t really practical.

So I was looking for a section of garden which, if not flat, wasn’t more than a metre from lowest to highest point. When I embarked on planning this railway, I quickly identified two sites, but each with some significant limitations.

Option 1: Round the pond, by the house

Track beds need to be kept clear. The beds near the house ought to be kept weeded and tidy, a job that could neatly be combined with track maintenance. Scale planting wouldn’t look out of place. There’s a pond – an essential element of the railway, in my mind, is it should be reflected in still waters… Proximity to the house would also mean chilly winter running would be more comfortable with the kitchen kettle closer at hand – and in extreme conditions, trains could even be observed from the living room window.

However, this site would also severely constrain space – curves would have to be minimum radius, little more than a loop and a spur for a station would be possible with not possibility of future extension. Almost all track would be at ground level and could only be observed close to, so the line would be predominantly viewed from an ‘aerial’ position.

Putting the railway here it would be the first thing visitors see… whether that’s good or bad, it’s a statement!

Option 2: Up the garden, in the wilderness

This location is tucked into the ‘wildlife’ (i.e. neglected) part of the garden where the hedgerows frequently become overgrown. Construction would be more difficult – it would need to be sympathetic and suitably ‘rustic’ because this patch of land is never going to qualify as ‘well-manicured’. The reflection of steam in water would require the building a pond…

But at this location, I could at least incorporate some variations in height, possibly including a stretch of tunnel. It would also have potential for future extension – if I could figure out how to cross the lawn – and this might allow me to reach the shed at worktop height – ideal for steaming up and assembling trains, and whilst not offering the same comfort of the kitchen, might accommodate a kettle for the cheering cup of tea during wet weather running.

It took many months of talking this over and contemplating. My ever-wise mother made the most welcome suggestions when she advised me to “do both” but that’s an expensive option – and I realised I still had the problem of deciding which to do first…

In the end, the decision would be made easier when fate played its hand…