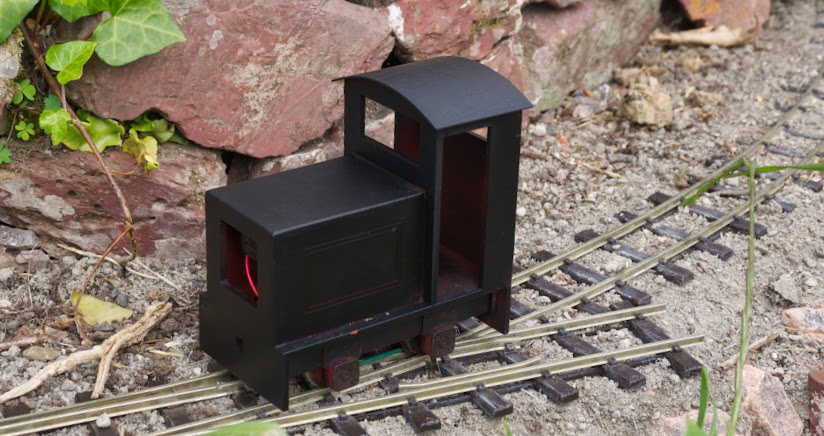 So here it is, filmed on test run day (25 May), a complete circuit of the line in 2’39” shot from a train hurtling along at a scale 4 to 5 mph. I’ve found it’s an excellent way to view all the flaws in your track laying.

Firstly: how successful was the test? Much more so than I imagined! Apart from a few initial derailments caused by leaves or twigs (you’ve really got to clear carefully, haven’t you?) the loco proved capable of running at a pleasingly slow speed, smoothly round the line… with one exception. It wouldn’t reliably clear the Peco points… (Yes, I know I made a thing about keeping phase 1 simple – just a loop, no pointwork – but I my resolve weakened and I set them in place ready for phase 2). The problem was the back to back gauge on the wheels is too narrow and the flanges are catching on the check rails. I haven’t (yet) managed to apply enough force adjust the wheels… but I’m still hoping it’s possible to do so… [update: the issue proved to be the check rail on the point, not the HGLW wheels].

And yes, I have started and stopped the video at the points to disguise the problem with the check rail….

The video was made by mounting my Panasonic GF3 (zoomed out to 14mm) on top of the parcels wagon, which was then propelled around the track. I thought I might have to haul it round rather than propel it, and then have to reverse the video, but this did not prove necessary.

Earlier in the day in an attempt to film the line I had successfully wedged by iPhone 4 into the loco cab, but either the motion or the interference from the motor played merry hell with the rolling shutter. The light engine managed to hit 6 mph.